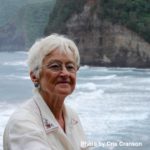 Margaret Ann Meta “Midge” Cranson passed away at home with her children at her bedside, June 12, 2020, just days before her 95th birthday after suffering a massive stroke on June 9th.

In celebration of Midge’s life, a private family memorial service will be held at 10:00 am, June 30, at the First Church of La Junta, 22nd and Raton. A future inurnment service is being planned.

Memorial contributions may be made in her name to Children’s Ministries, First Presbyterian Church, La Junta, or to Inspiration Field, La Junta.

The memorial  service will be live streamed by La Junta First Presbyterian Church. To view the service on their YouTube video channel, go to the following and click the link below the picture.

A full obituary will be posted to midgecranson.com